Drought is a principal cause of water availability shortages in the Susquehanna River Basin. The Basin is susceptible to extended drought due to varied topography, geology, and climatic influences. Shortly before the formation of the Commission, the extended drought of the mid-1960s set the benchmark for drought planning. Many drought operation plans are still based on recurrence of 1964 conditions. Following adoption of the Susquehanna River Basin Compact, severe droughts occurred in 1980-81, 1985, 1991-92, 1995, 1998-99, 2001-03, and 2016.

Significant Low Flows on the Susquehanna River at Marietta, Pennsylvania During 2002 Drought 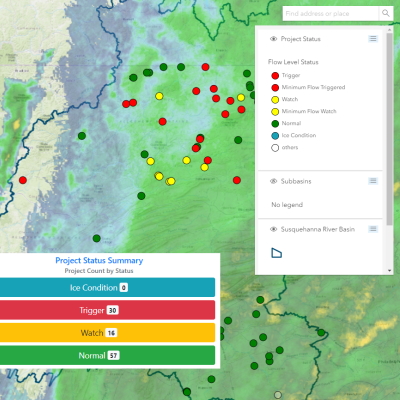 Hydrologic Conditions Monitor (HCM) - shows the status of water use projects regulated by the Commission that have passby flow requirements.